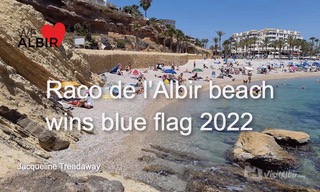 Albir’s tourism received a boost yesterday from the news that it’s El Raco beach has been awarded a Blue Flag from the Foundation for Environmental Education (F.E.E).

Did you know that Albir has won this award for El Raco beach for the last 37 consecutive years, in fact, ever since the awards started in 1985? There are only a handful of municipalities in Spain with such a consistent record.

The blue flag recognises the excellent quality of the waters, safety of the bathers, environmental education and information, and services.

The Valencian Community has more blue flags than any other region and Spain returned a record 729 blue flags, 16 more than in 2021. Unfortunately, Benidorm’s Poniente beach lost its blue flag this year, so we must never take these awards for granted.

Well done to everyone involved in maintaining our beach to such a high standard!